LAWPLAST, located in a building bought in 1991 by the SES-STERLING group, has just completed 5 years of renovations, security and expansion by its inauguration on Friday, November 9, 2018. It was an opportunity for SES-STERLING to return to the history and development of LAUWPLAST.

A production unit for cable trunking

LAUWPLAST is one of the 6 production sites belonging to the SES-STERLING group, not counting the other two for gift wrapping ribbon (AMMANN-SANDER and TODA). It is a production unit of cable trunking, with 25 employees. It has 5,000 m² storage space and 5,000 m² production space which were presented by Patrick EGEA (President of SES-STERLING Group) to about twenty people during the inaugural day.

Within this unit are produced 8,000 km of cable trunking per year, as for example our cable trunking GN-HF.
Production equipment is developed internally.

LAUWPLAST also wants to respect the environment in which it is established.
Indeed, it works in closed circuit, which means that we recycle used water not to impact the Doller, a precious watercourse. Offcuts and wastes are recycled.

Reminder of the reasons for setting up in Lauw

Patrick EGEA took the opportunity of this inauguration to remind the history of this site, in particular the reasons for the establishment of the company in the munipality of Lauw.

In 1991, SES-STERLING moved into the building in Lauw, under the leadership of Marcel HESS, who thought it would be easier to find employees in the city of Lauw rather than Saint-Louis.
It was also a possibility to have an interesting exploitation area.

Several changes were made to the structure as was reminded during the speech of Patrick EGEA:

This development was encouraged by the support of local actors, who facilitated the steps of SES-STERLING:

Of course,  the Mader Society, Mr. Kornacker ah his sons assisted by Mr. Lange of IDC architectes, and the local subconstractors also contributed to the project.

The President of SES-STERLING Group didn’t hide the precious help from his own teams:

Positive final result of these 5 years of work 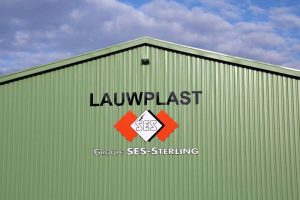 Patrick EGEA highlighted during this inauguration, that the 5 years of work required a big investment, necessary for a pleasant working environment for the employees of LAUWPLAST: “clean, clear and spacious“.
Always in its terms, this renewal, which is a pride, allows to adapt to the development of the company.

We talk about it in the media, which covered the event that we thank:

The ADIRA (Development Agency in Alsace) also talked about it on its website on 11/14/2018.

2 Replies to “Inauguration of LAUWPLAST: return on its story”